Three years on from the Jungle, local authority turns to force to stop another camp forming 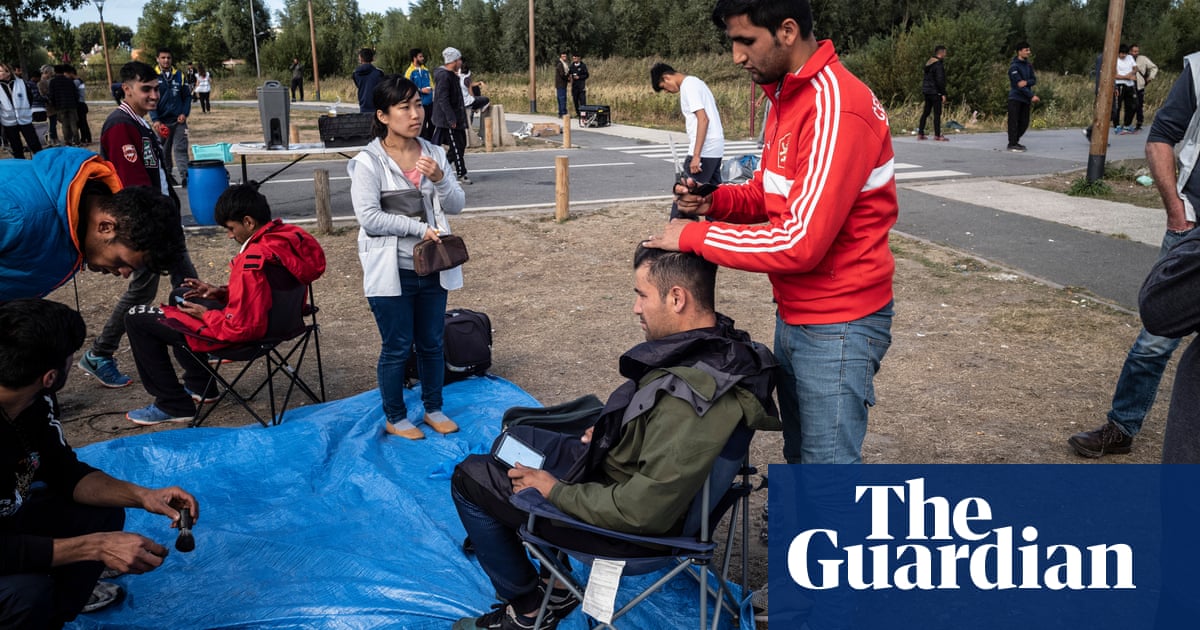 Osilama Michael, better known as Mike, doesnt remember the last time he was able to get more than a couple of hours of sleep. An asylum seeker from Nigeria, he said he keeps being woken up by random police raids, which have become a daily occurrence at migrant encampments across Calais, France.

They often have a police officer shouting get out of here. They use one car to block one side of the camp and another car to block the other. You think they are coming for war, Mike said.

Its been three years since the so-called Jungle, a refugee camp where around 10,000 migrants lived, was cleared. But asylum seekers such as Mike, who arrived in Calais six weeks ago, still stop at the northern French port before reaching their final destination: the UK. The local authority has turned to force to prevent another camp from forming, with migrants complaining of brutal beatings, regular arrests, and the confiscation of their tents and sleeping bags.

Charity workers have linked the rapidly worsening situation on the ground to the increase in the number of asylum seekers attempting to reach the UK on small boats. So far this year more than 1,000 people, including children, have crossed the Channel, the worlds busiest shipping lane.

Help Refugees estimates there to be around 600 migrants in Calais, and, before Tuesdays eviction, under 1000 in Dunkirk. There are about 300 unaccompanied children in Dunkirk and Calais, the youngest being seven.

Ibrahim Basar, 27, who fled Chad almost two years ago, said he feels like he has aged decades in that time. He was kidnapped in Libya and forced to sleep in overcrowded pens with little water or food. When I escaped and was on the boat, all I could think about was death.

He had hoped his life would improve once he reached Europe, but that dreaded feeling has stayed with him in France. I feel like my mind is slipping. I cant remember the last time Ive slept, he said. I ask the police for help, but they just beat us and take us to jail.

The raids at makeshift camps, which take place at random, is akin to psychological torture, Maddy Allen, the Help Refugees field manager in France, said. Police officers move people away from an encampment, confiscate or destroy tents and sleeping bags, and take away personal belongings. Those who return are left sleeping on the floor. In 2016, the charity would expect a tent to last about six months, now a displaced person is unlikely to hold on to one for more than a week. The hostile environment has been exported here, Allen said.

The largest eviction in the past year started early on Tuesday in Dunkirk, where over 700 migrants were living in an encampment in a gymnasium and the surrounding field. One elderly man cried out to God when he was told he would be moved on, but most seemed resigned to their fate. As the sun rose, armed police placed a cordon around the camp to prevent people leaving.

In the summer of 2017, Mohamed was walking down a busy street in Hasakah when a bomb exploded. He woke up three days later to find he had lost his right hand and fragments of shrapnel embedded in his stomach. He decided to leave Syria three months ago to get surgery on his stomach and get a prosthetic limb. He lights up when talking about starting a new life in the UK: I know the UK is beautiful and its safe.

While the evictions at the gymnasium were well organised and peaceful, migrants residing in a makeshift camp at a nearby nature reserve were dispersed with greater force. As well as taking peoples tent, police burned food and cooking material, and confiscated water and milk.

Clare Maillot, who worked with the local migrant charity Salam for the past decade, said the razing of the camps was deliberate. They will take the outside toilets, cut off the water, and take the tents to make sure theres nothing to come back to.

Martina Villa, a communications executive at Doctors of the World, who was observing the Dunkirk evictions, said the situation had become dire for refugees in northern France. The mood in the settlements is very low. We have seen people who are left with no food, water and shelter because of the evictions. They feel like they have no safe spaces in which they can stay.

A team from Doctors of the World had a roaming medical tent in Dunkirk and Calais this week. Many of the people we met in our outreach action were too scared that the police would reappear to venture beyond the edge of the forest to get food and water. It took a lot of persuasion to reassure them, Villa said. Medical staff came across people with back problems, injured feet, skin rushes from sleeping without shelter in the forest, chest infections, bruises, and cuts.

Charity workers driving back to Calais after observing the evictions in Dunkirk saw migrants walking in the same direction alongside the motorway. They would arrive to find a strong police presence across Calais, but particularly at the ports, which have heat scanners, sniffer dogs, and drones surveying the beaches.

Allen said the militarisation of Calais has transformed the towns landscape. Authorities have cleared shrubberies and cut down trees, while fences, some with barbed wires, can be found around much of the town.