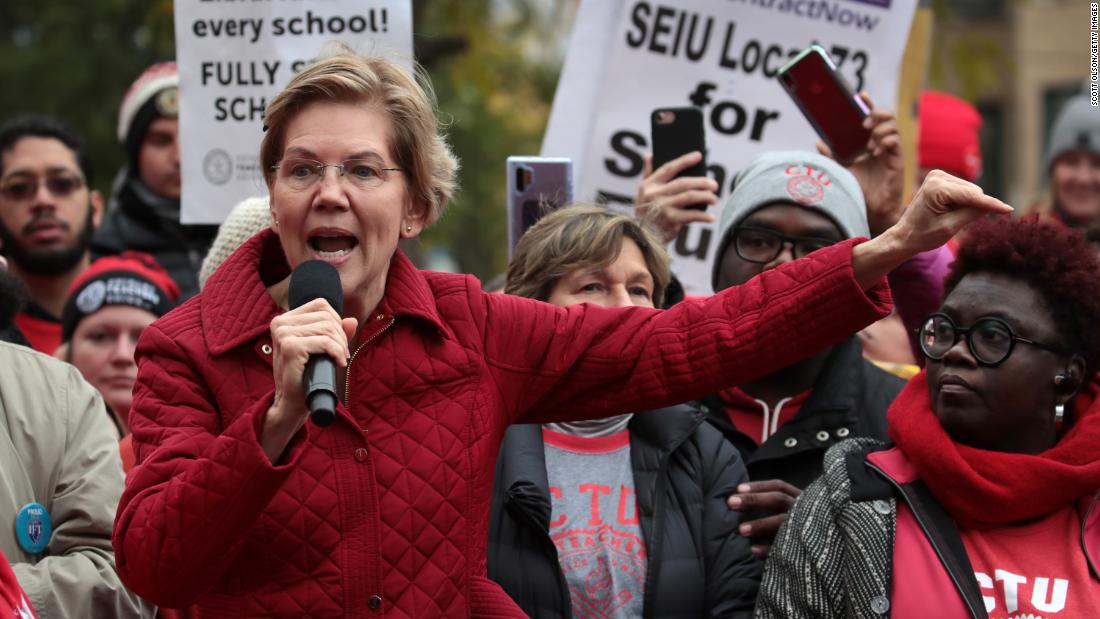 (CNN)In touting her new plan to pay for Medicare for All, Sen. Elizabeth Warren has argued that she won’t raise taxes on the middle class.

The claim and much of Warren’s plan has come under scrutiny, especially given the whopping $20 trillion of new federal spending Warren’s campaign estimates it would cost over the next decade. (The Urban Institute places that estimate much higher, at $34 trillion.)
Conservatives have poked fun at Warren’s plan. Nebraska Republican Sen. Ben Sasse said that the senator’s “make-believe math is bonkers.” The Wall Street Journal’s editorial board joked that Warren’s promise that her plan would not increase middle-class taxes is as serious as saying she “walks on water too.”
The campaign of Warren’s 2020 rival Joe Biden has also criticized a key element of Warren’s plan, claiming it would place a new tax of almost $9 trillion on American workers.
Facts First: Warren’s claim that her plan won’t raise middle class taxes largely depends on what is considered a “tax” in the first place. While experts CNN spoke with agree that the tax mentioned by Biden’s camp would ultimately be passed onto employees, Warren’s camp argues that’s essentially beside the point, since her plan will ultimately save consumers and companies trillions of dollars by eliminating the amount they pay for health care, both in the form of employee-paid premiums and deductibles and in employer contributions to fund private health insurance.
First, some basic facts on Warren’s plan and how she says it would raise the necessary revenue.
It’s worth noting that Warren would need a series of laws to pass through Congress to be able to do any of this. And that it could also face legal challenges. For example the ability to tax wealth is not enshrined in the Constitution.
It’s also worth noting that some economists believe that Warren’s plan could have a series of long-term knock-on effects such as lower wage growth and corporate investment.
In attacking Warren’s plan, Biden’s spokesperson references the employer health spending section. Under her plan, employers would essentially be paying the federal government for their employees’ health coverage instead of insurance companies. This, according to Warren, would provide around $9 trillion over a decade to the government and would save companies “$200 billion over the next ten years.”
Ultimately the tax would cut into workers’ paychecks, experts say.
Erica York, an economist at the right-leaning Tax Foundation says that employers would likely just pass on that tax to employees. “The economics of tax burdens don’t really care about who signs the check,” York told CNN.
“If we look at Warren’s new employer Medicare contribution, she doesn’t call it a payroll tax, but that doesn’t change the underlying economics that it amounts to a payroll head tax, or a flat contribution per employee,” York said. “Economists across the spectrum agree that the burden of a payroll tax falls on the worker.”
Howard Gleckman, a senior fellow at the left-leaning Urban-Brookings Tax Policy Center. told CNN that the employer contribution tax from Warren’s proposal is “an indirect tax.”
“What Warren is saying is, in effect, ‘you’re going to pay nothing for this insurance.’ … and the reality is, it’s not totally free,” Gleckman said. “The basic story [Biden] is telling — I think — is more right than the basic story that [Warren] is telling, at least as far as this piece of the proposal is concerned.”
Some tax policy experts CNN spoke with pushed back on the claim from Biden’s campaign, noting that Americans are already paying trillions of dollars in health care costs, which could be seen as a tax itself.
“In the end, it’s improbable that middle class Americans will have no additional taxes,” Edward Kleinbard, tax expert and a chair at the University of Southern California’s law school told CNN. “But middle-class Americans — or Americans more generally today — are paying an 11 trillion-dollar tax in the form of their private health care spending.”
Kleinbard cautioned that proposed plans covering the cost of Medicare for All “are nowhere near specific enough to actually price out” the cost, and where it would ultimately fall.
The employer contribution in Warren’s plan is a “new tax,” however, it goes to the same product (health care) that employers are already covering — and taking out of their employees’ paychecks. The total amount is roughly the same; whose coffers are filled is what changes.