Ahead of Mondays election, little divides the Liberal prime minister and the reactionary Conservatives. But there is an alternative, says journalist and author Martin Lukacs 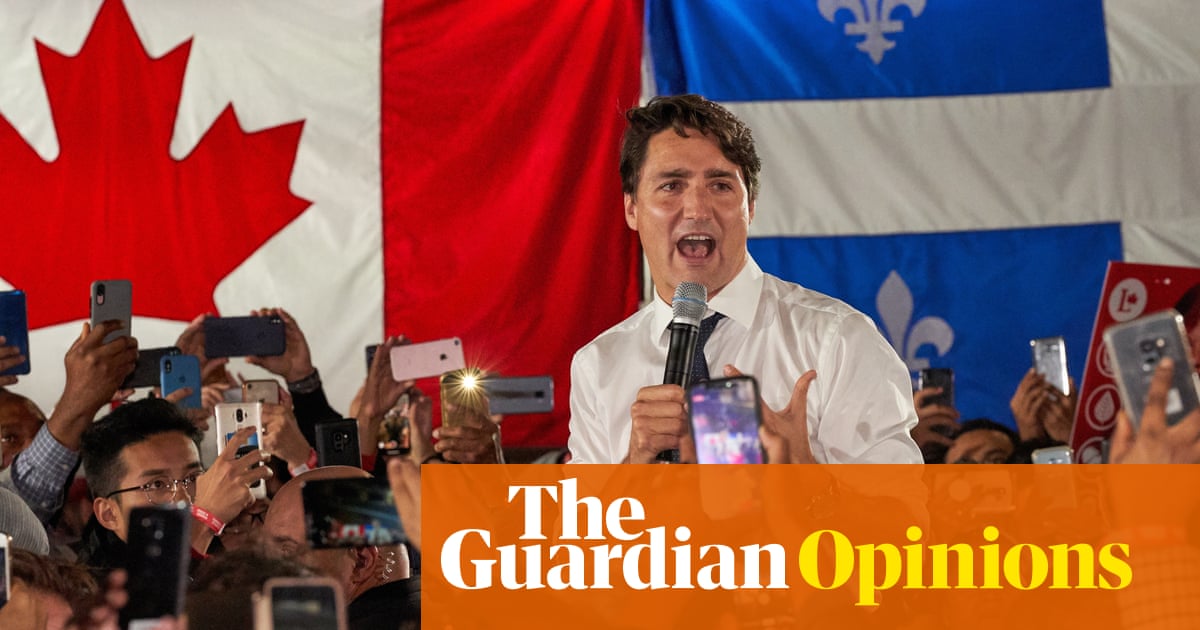 How far Justin Trudeaus star has fallen. In 2015, the rise of this hopey-changey wunderkind was supposed to usher in a bold new Canadian era: democratic reform, ambitious climate action, a plan to tackle inequality, and a new, respectful relationship with Indigenous peoples. But his Liberal partys bid for re-election, ahead of the election on Monday, looks altogether different: this campaign is dominated by warnings, in ominous tones, about the threat posed by a resurgent, rightwing Conservative party.

Its not hard to understand why. Trudeaus leftwing posturing has been exposed as a sham. His widely hyped tax hike on the richest 1% was actually a giveaway to the next richest 10% of Canadians. His embrace of a carbon tax became a cover for frenzied approval of fossil fuel projects, culminating in his purchase of a C$4.5bn (US$3.45bn) tar sands pipeline. He dispatched heavily armed police to violently dismantle a peaceful blockade of Indigenous land defenders. He made Canada the second largest weapons dealer to the Middle East, arming the Saudi war on Yemen. And he pressured his own justice minister to exempt a well-connected and corrupt engineering giant from a criminal trial. Beholden to powerful vested interests, Trudeau promised big but delivered small.

And so the energy he rode to power has evaporated. Trudeaumania, as one analyst put it, has been replaced by Trudeau-meh-nia. Now that the shine has worn off the Liberals formula of fake progressivism, were being treated to the partys perennial fall-back: exhortations to back them strategically, lest the Conservatives come to power. Trudeaus pledge to do politics differently has devolved into straightforward moral blackmail.

Of course, its true that a government under Conservative leader Andrew Scheer would be a frightening ordeal: C$35bn (US$26.6bn) in spending cuts, tax giveaways to the wealthiest, climate change denialism, and a potential erosion of abortion and LGBTQ rights. But the Liberals invocation of this rightwing threat is hardly in good faith. Its something they have done time and again to muzzle the political imagination of Canadas progressive majority of voters. Artificially shoring up the idea that the country is stuck between two parties has one main objective: scaring Canadians into settling for the pipeline-buying establishment Liberals.

This fearmongering distracts from just how many economic policies Liberals share with Conservatives corporate tax cuts, creeping privatisation, attacks on workers rights and relentless resource extraction on Indigenous peoples lands. The two parties implementation of this free market agenda has resulted in a wildly unequal social order: stagnating wages, unaffordable housing and skyrocketing corporate profits stashed away in offshore tax havens. Its no wonder that 67% of Canadians, according to a poll last month, believe correctly that the economy is rigged to advantage the rich and powerful.

The Liberals inflated rhetoric against the Conservatives also disguises just how comfortable they are swapping power. They consistently propped up former Conservative prime minister Stephen Harpers minority government, though they could have toppled him by forming a coalition that included the social democratic New Democratic party (NDP). And when the NDP itself contended for office in the 2018 Ontario provincial election, the Liberals attacked it ferociously, enabling victory for the reactionary Conservative leader Doug Ford. Liberals have always been more afraid of a challenge from the left than the right.

But if Canadians want the kind of country that reflects their progressive views, the choice in this election is clear: vote for the NDP. The overlooked story of the election is the surge in the partys popularity, which has come at the expense of both the Liberals and Conservatives and in spite of the medias efforts to write it off.

Under the leadership of Jagmeet Singh, the NDP has finally halted its right-ward slide which allowed Justin Trudeau to outflank it to the left in 2015 and is offering its most progressive platform in a generation. State-funded dental care and prescriptions, 300,000 green jobs and free public transit, paid for by a wealth tax on the ultra rich: the sort of the ambitious leftwing policies that polls consistently show Canadians are hungry for.

In an age of turmoil, it is this kind of politics, rather than establishment Liberalism, that can hope to stem the tide of an increasingly xenophobic right. Pervasive insecurity and discontent in Canada, fundamentally unaddressed by Liberal policies, have been capitalised on by rightwing politicians to scapegoat migrants and Muslims followed closely by openly white supremacist groups, whose numbers have nearly tripled since Trudeau came to office. This weeks endorsement of Trudeau by Barack Obama underscores the dynamic: both are defenders of a bankrupt, corporate-friendly centrism that has demonstrated it is no match for rightwing faux populists such as Donald Trump. This is what gives the ultimate lie to the promise of strategic voting. The politics of the Liberals arent a lesser evil they are the surest path to greater evil.

The only answer to a rising right will come from a left courageous enough to take on vested interests, rather than the vulnerable and to redistribute obscene levels of private wealth in the service of the public good. The NDP is not going to win this election. But if Canadians elected enough of its MPs, a minority Liberal government might be forced to rely on the party to pass legislation: this would provide powerful leverage in parliament to push for vital new social programs and a transformative approach to the climate crisis, with social movements pressuring from the outside. Universal healthcare, public pensions, the 40-hour work week, same-sex marriage: all were won under previous minority Liberal governments when the NDP held the balance of power.

But for that to become possible after Monday, it will take voting from hope, not fear. In this election, Justin Trudeau isnt Canadas real progressive choice nor the politician to stop the rise of an ugly right.

Martin Lukacs is a journalist and author of The Trudeau Formula: Seduction and Betrayal in an Age of Discontent